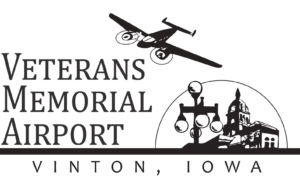 24 hour fuel is available at the airport.

Our fuel pumps offer 24/7 credit card fueling so you can get fuel any time of the day or night. If you need help fueling or have questions regarding the courtesy car or overnight hangar rental, give Mark a call at 319-560-9363. The fueling system is owned and operated by the City of Vinton.
We offer:
Jet A with Prist
100LL
MoGas

The Vinton Veterans Memorial Airport was founded in the mid-1960s by the City of Vinton. Realizing the economic impact of a local airport, city officials formed the Airport Commission to oversee the new airport and promote aviation.

The City continues to support aviation in the community and relies on the Commission for day-to-day operations.

The airport is home to thirty aircraft, including three helicopters, and these businesses:
* Iowa Wing and Rotor
* Mayland Aerial Photography
* Noe Aviation

The Iowa DOT estimates there are 4,500 takeoffs and landing at the Vinton Veterans Memorial Airport each year!

Many pilots have told us that the services provided in Vinton are better than at larger airports in the area. If you are interested in calling Vinton Veterans Memorial Airport your home, give us a call.

Uses of the Airport

The airport is a gateway for visitors and businesses to the area it serves. Several local business owners rely on the airport to support their aviation needs.

During recent weather-related natural disasters, the Vinton Veterans Memorial Airport enabled state and federal officials to inspect damage in the area to hasten federal and state aid and relief.

What is the economic benefit of Vinton Veterans Memorial Airport?

Communities and regions throughout Iowa benefit from local airports and a wide range of general aviation activity that promotes a strong economy and supports our quality of life.

The airport operates on an annual city budget of less than $25,000! Revenue is obtained through grants, fuel sales, hangar rental and lease of farmland.

A recent study commissioned by the Iowa Department of Transportation’s Office of Aviation estimates the economic benefits of the Vinton Veterans Memorial Airport to include:
* $939,600 in total annual economic activity or output generated from the airport and its operation.
* 12.5 jobs supported by businesses, activities, capital improvement projects and spending by visitors who arrive in Vinton via the airport.
* $282,800 in annual payroll for the 12.5 employees whose jobs are linked to the Vinton Veterans Memorial Airport.

Additionally, the airport adds value to the community as a result of the activities that it supports. For example, increases in crop production from aerial spraying further boost agricultural economies. Increases in efficiency and productivity can be realized by companies utilizing airports in Iowa.

Finally, there are public benefits from aviation services. Medical transport, search and rescue, and disaster recovery efforts are just a few examples of how the Vinton Veterans Memorial Airport is vital to Vinton and surrounding communities.